The Art of Film 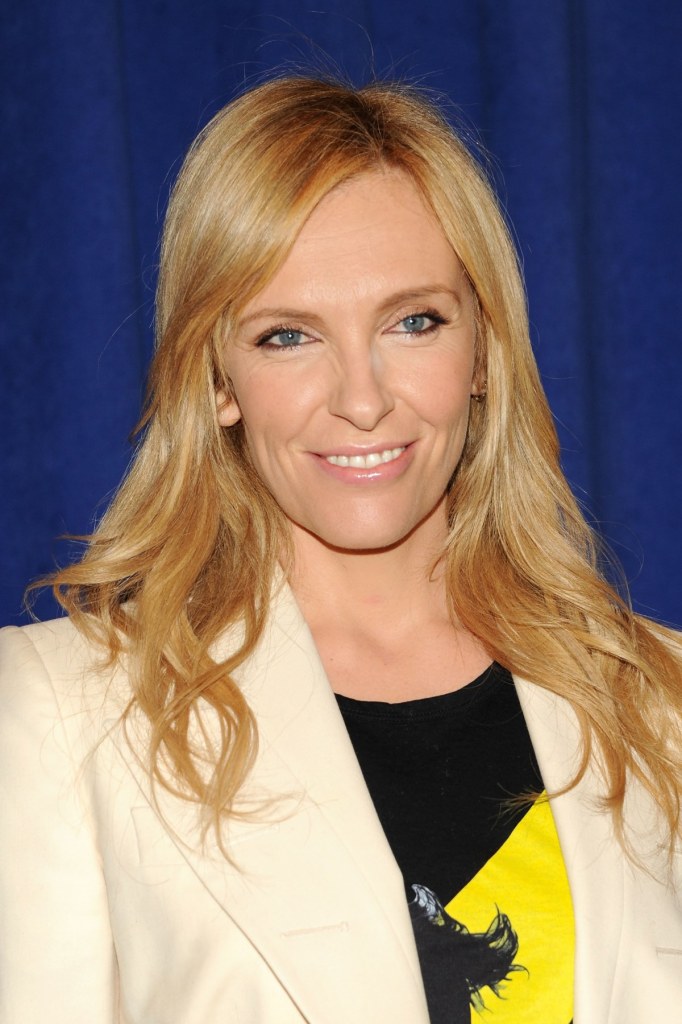 I’m excited to share the news of the 5th annual Art of Film event benefitting the Dallas Film Society. This years honoree joins the ranks of Robert Duvall, John Lithgow, Val Kilmer and Lee Daniels.
The Dallas Film Society is thrilled to honor Emmy® and Golden Globe® award-winning actress Toni Collette at The Art of Film on Friday, November 21, 2014.
Emmy and Golden Globe award winner Toni Collette made an indelible impression on Hollywood with her beautiful portrayal as the hopeless and desperate ‘Muriel Heslop’ in P.J. Hogan’s 1994 film, MURIEL’S WEDDING. Proving her amazing ability to transform into the characters in which she plays, Collette has since starred in a variety of intriguingly diverse roles both in television and feature films throughout the last two decades, including “The United States of Tara,” for which she won both a Golden Globe and an Emmy Award, and her well-regarded roles in LITTLE MISS SUNSHINE and THE SIXTH SENSE, which earned her an Oscar Nomination in 2000.

We invite you to join us for this elegant fall evening that kicks off under the glamorous lights of the red carpet. You’ll mingle with cinematic-minded friends during our cocktail reception before enjoying an intimate, hourlong discussion with our honored guest. Afterward, we’ll sit down to a lavish banquet and raise our glasses to celebrate the filmmaker’s craft.

Proceeds from the evening are directed to the year-round programming of the Dallas Film Society, the 2015 Dallas International Film Festival—presented by AutoNation and the 2015 DFS Summer Film Camp—presented by SMU – Division of Film & Media Arts.
Click here to reserve your place at The Art of Film.
Hope to see you there! xoxo- Tanya
About Toni Collette
Emmy and Golden Globe award winner Toni Collette made an indelible impression on Hollywood with her beautiful portrayal as the hopeless and desperate ‘Muriel Heslop’ in P.J. Hogan’s 1994 film, MURIEL’S WEDDING. Proving her amazing ability to transform into the characters in which she plays, Collette has since starred in a variety of intriguingly diverse roles both in television and feature films throughout the last two decades.Upcoming, Collette stars in A LONG WAY DOWN, a film adaption of British writer Nick Hornby’s novel of the same title. The film, directed by Pascal Chaumeil, and also featuring Pierce Brosnan, Imogen Poots and Aaron Paul, premiered at the Berlin International Film Festival on February 10, 2014. The story follows four people who meet at the top of the building New Year’s Eve, all with plans to commit suicide. Lionsgate will release the film in the UK on March 21, 2014.In April 2014, will make her much-anticipated return to Broadway in Will Eno’s “The Realistic Joneses.” The production will begin previews in March and open on Sunday, April 6th at the Lyceum Theatre. Directed by Sam Gold, the play also stars Michael C. Hall, Marisa Tomei and Tracy Letts.

Also this spring, Collette stars alongside Thomas Haden Church in LUCKY THEM. The film, directed by Megan Griffiths, premiered at the Toronto International Film Festival in September 2013 to rave reviews. David Rooney of The Hollywood Reporter said the film was “Centered by smart, soulful work from the wonderful Toni Collette.” The comedy will be released by IFC Films on May 30, 2014.

In Fall 2013, Collette appeared in director Nicole Holofcener’s (FRIENDS WITH MONEY) romantic comedy, ENOUGH SAID. The film starred Julia Louis-Dreyfuss and the late James Gandolfini and was released by Fox Searchlight on October 11, 2013.

In Summer 2013, Collette starred in THE WAY, WAY BACK opposite her LITTLE MISS SUNSHINE co-star Steve Carrell, Sam Rockwell and Allison Janney. In the film, Collette plays ‘Pam,’ the mother of fourteen-year-old Duncan who comes into his own over the course of his summer break thanks in part to the friendship he strikes up with one of the park’s managers. Nat Faxon (THE DESCENDANTS) and Jim Nash (THE DESCENDANTS) wrote and directed the Fox Searchlight film, which premiered at the 2013 Sundance Film Festival.Recently, Collette was seen in HITCHCOCK, opposite Anthony Hopkins and Helen Mirren. The biographical film centers on the relationship between director Alfred Hitchcock (Hopkins) and his wife Alma Reville (Mirren) during the making of Psycho, the controversial horror film that became one of the most acclaimed and influential works in the filmmaker’s career. Collette played ‘Peggy Robertson,’ Hitchcock’s long-time British, eagle-eyed and fiercely protective assistant.In 2012, Collette co-starred in JESUS HENRY CHRIST, a comedy produced by Julia Roberts and which also stars Michael Sheen. In the film, she played the role of ‘Patricia,’ a decidedly offbeat woman who has become an ardent feminist raising her brilliant son, who has one of the highest IQs in recorded history.

Collette will also appear in the upcoming films MENTAL, and is currently in production on UNTITLED NICOLE HOLOFCENER, and THE LONG WAY DOWN.

Collette was previously seen starring in Showtime’s hit series “United States of Tara,” written by Academy-Award winner Diablo Cody (JUNO). Collette portrayed the title character, ‘Tara,’ a woman struggling to find a balance between her dissociative identity disorder and raising a dysfunctional family. John Corbett and Brie Larsen co-starred in the comedy. The show premiered on January 18, 2009 and garnered Collette both an Emmy Award and a Golden Globe Award for “Best Actress in a Comedy Series,” as well as two Screen Actors Guild Award nominations. The show ended after three seasons in 2011. In that same year, Collette starred in FOSTER, an independent film directed by Jonathan Newman. Additionally, Collette was seen opposite Colin Farrell in the horror film FRIGHT NIGHT.

In 2009, Collette lent her voice to the Australian animated film, MARY AND MAX, which was written and directed by Academy-Award winner Adam Elliott. Collette played the voice of Mary, a lonely eight-year-old girl living in the suburbs of Melbourne who becomes pen pals with Max Horovitz (voiced by Eric Bana), a 44-year-old Jewish man with Asperger’s Syndrome living New York.

In 2007, Collette starred in THE BLACK BALLOON, an independent film that was awarded the Crystal Bear Award at the Berlin International Film Festival. Directed by Elissa Down, Collette portrays the struggling and accepting mother of an autistic child, who is played by Luke Ford.Additionally, Collette’s past projects showcase her mandate of tasteful choices as an actress. She starred in the Alan Ball ensemble, TOWELHEAD, which also starred Aaron Eckhart, Peter Macdissi and Maria Bello and was released in fall 2008. In 2007, Focus Features released EVENING, which is about a dying woman (Vanessa Redgrave) reflecting on her youth when she met the love of her life, as her two daughters (Toni Collette and Natasha Richardson) wrestle with her impending death. EVENING, is based on the best-selling novel by Susan Minot and is directed by Lajos Koltai. Also in 2007, Collette starred in the Australian children’s film HEY, HEY IT’S ESTHER BLUEBURGER opposite Keisha Castle-Hughes.Some of Collette’s other projects that have shown her versatility as an actress include The Sundance Film Festival hit, LITTLE MISS SUNSHINE, that went on to be a huge critical and box-office success. This sleeper hit, which also stars Greg Kinnear, Steve Carrell and Alan Arkin, is about a dysfunctional family hell bent on getting their little girl to win a beauty contest. Collette also appeared Miramax’s 2006 thriller THE NIGHT LISTENER with Robin Williams and Sandra Oh, written and directed by Terry Anderson. That same year, she appeared in the Australian film LIKE MINDS, starring Richard Roxborough, where Collette stars as a forensic scientist investigating a schoolboy’s murder, and mystery/thriller THE DEAD GIRL alongisde Josh Brolin and Rose Byrne.

In 2005, Collette starred opposite Cameron Diaz and Shirley MacLaine in the critically acclaimed film IN HER SHOES, directed by Curtis Hanson and based on the best-selling novel by Jennifer Weiner. IN HER SHOES is about two very different sisters, Rose (Collette), who is climbing her way up the corporate ladder and Maggie (Diaz), who is the consummate party girl, with nothing in common with each other but size 8½ feet. IN HER SHOES, a 20th Century Fox film, was produced by Ridley Scott.

Collette received some of the best reviews of her career in the Samuel Goldwyn’s release, “Japanese Story,” for which she garnered extraordinary critical acclaim for her portrayal as ‘Sandy,’ a geologist whose outlook on life changes when she crosses paths with a Japanese businessman in the Australian desert. Collette received an Australian Academy Award as well as the 2003 AFI Award for “Best Lead Actress in a Lead Role.” The film also received a total of twenty-three awards and completed the Best Film trifecta in Australia, taking home the award at the IF Awards, the FCCA Awards and the AFI Awards.

In 2004 Collette starred in Universal’s comedy CONNIE & CARLA, opposite Nia Vardalos. The film follows two best friends as they flee from Chicago to Los Angeles after a run-in with the mob, finding the perfect undercover hideout: posing as drag queens on the cabaret circuit. Later that year, Collette then went on to co-star opposite Alec Baldwin, Matthew Broderick and Calista Flockhart in the Touchstone film THE LAST SHOT.Appearing in four films, 2002 marked a substantial year for Collette’s film career. She was seen in CHANGING LANES, a story of coincidence and consequence opposite Samuel L. Jackson; DIRTY DEEDS, an independent film set in 1960s Australia; opposite Hugh Grant in ABOUT A BOY, the hit box office adaptation from Nick Hornby’s novel of the same name, and the critically acclaimed film THE HOURS, opposite Nicole Kidman, Meryl Streep and Julianne Moore.In the summer of 2000, Collette appeared in the remake of SHAFT opposite Samuel L. Jackson, Vanessa L. Williams and Busta Rhymes. Directed by John Singleton, the film garnered strong box-office numbers.

Collette earned an Academy Award nomination for her performance in M. Night Shyamalan’s psychological drama THE SIXTH SENSE. Collette played a mother from South Philadelphia who must cope with the physical and emotional distress surrounding her young son’s paranormal powers.

In 1998, Collette was seen in the independent film THE BOYS, by Australian director Rowan Woods, which was adapted from Gordon Graham’s play. “The Boys” was shown in competition at the 1998 Berlin Film Festival and also stars David Wenham. In the same year, Collette appeared as the wife of fictional glam-rock star in the critically acclaimed Miramax film, VELVET GOLDMINE. She also delivered an unforgettable performance in Miramax’s 1996 adaptation of Jane Austen’s “Emma,” alongside Gwyneth Paltrow and Ewan McGregor.

Born and raised in Australia, Collette was a student at Australia’s prestigious National Institute of Dramatic Art (NIDA). In addition to her undeniable talent on-screen, Collette has had the opportunity to demonstrate her talents on Broadway’s stage. In 2000, she starred in the highly anticipated revival of “The Wild Party,” alongside Mandy Patinkin and Eartha Kitt. In the role of ‘Queenie,’ Collette displayed her extraordinary range as both actress and singer. Additional stage credits include performances for the Velvoir Street Theater and the Sydney Theater Company.