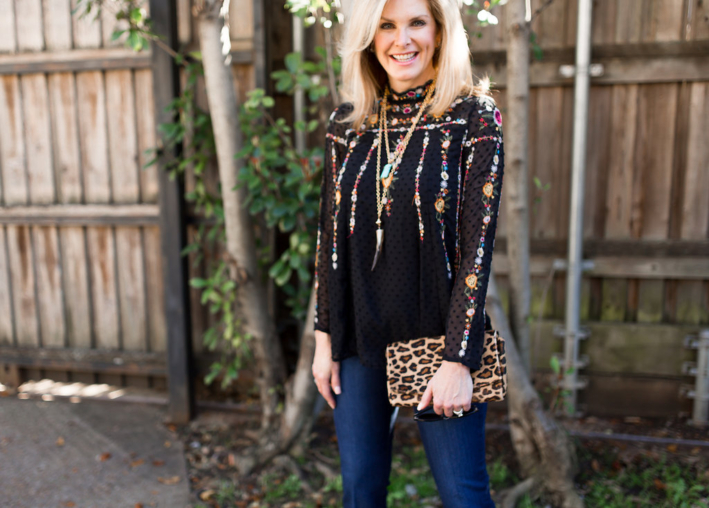 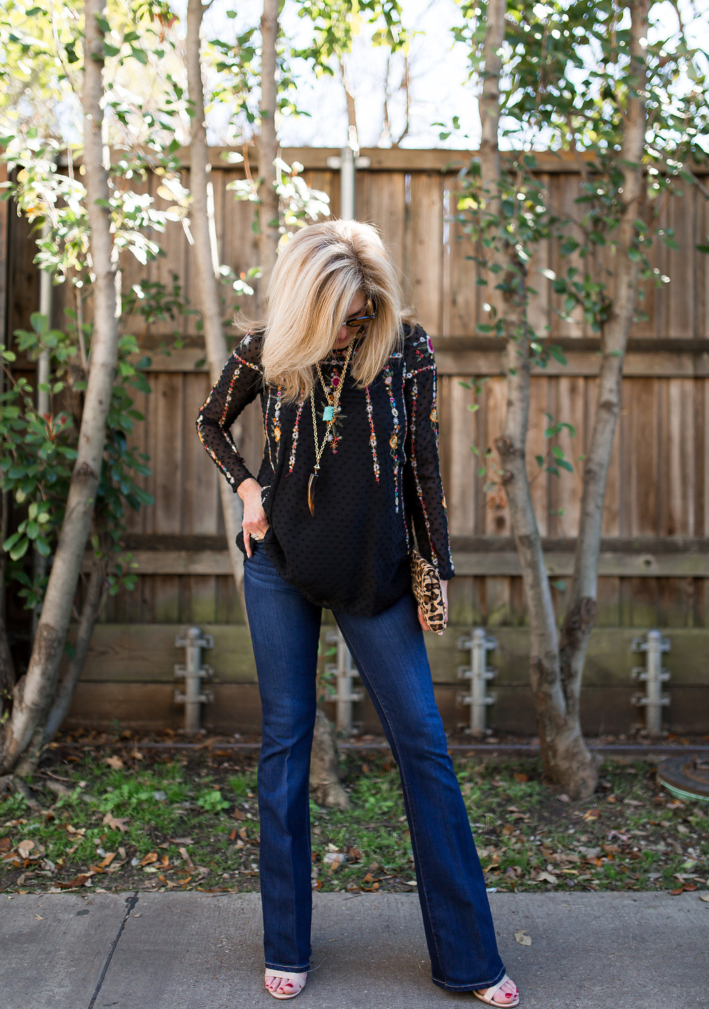 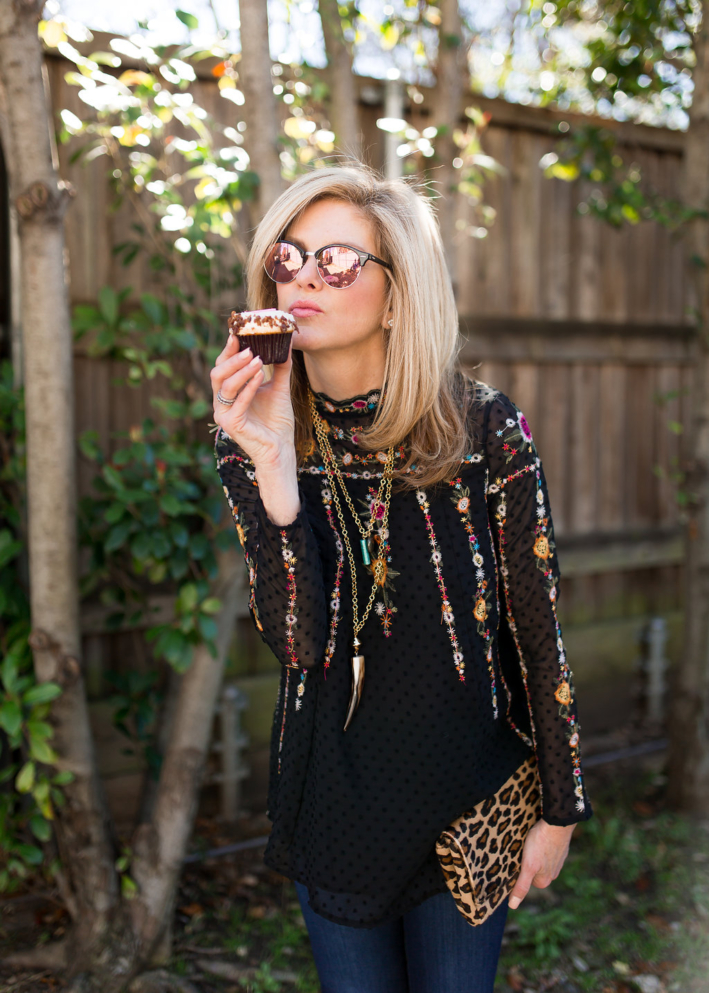 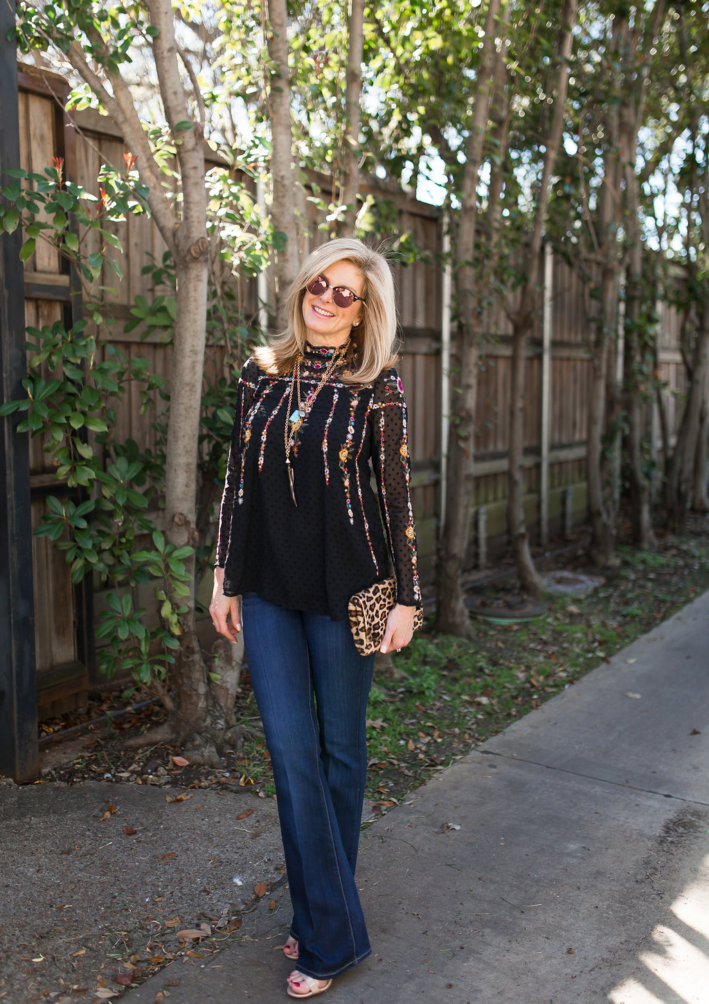 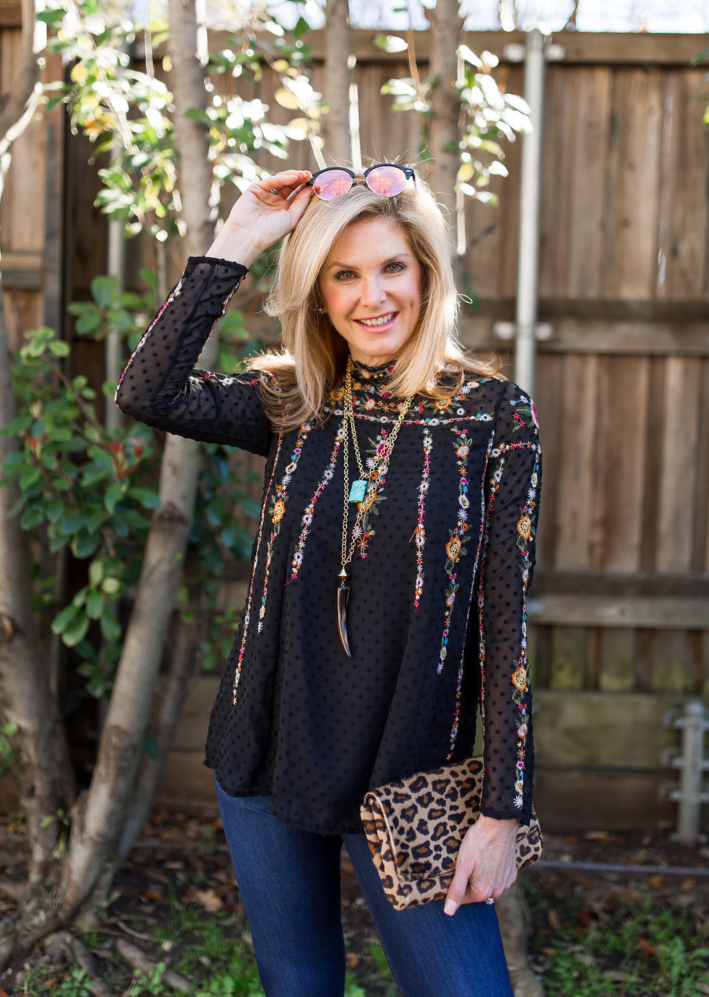 This blog post contains more than one subject, which is unusual for me. We will just call this a Manic Monday post. 1) I will show you this boho chic look with flared jeans (otherwise known as ‘How to hide those 5 lbs. you gained’). 2) I’m doing an advance screening giveaway to the film GIFTED (starring Chris Evans – a.k.a Captain America). 3) There’s inside information about how to navigate the Dallas International Film Festival. 4) And I’m finally going to cave and show you some of my acting work…

1.) This boho chic top and flared denim look is such a great way to elongate yourself and disguise any weight gain you might have encountered. These jeans are a bit more pricey but they are worth it. The fit is so good and they have a lot of stretch to them. They fit true to size. Anytime you can lengthen your leg, you will look taller and thinner. It’s an optical illusion but hey, I will take any help I can get. It’s definitely offsetting that Sprinkles cupcake I devoured after this shoot. 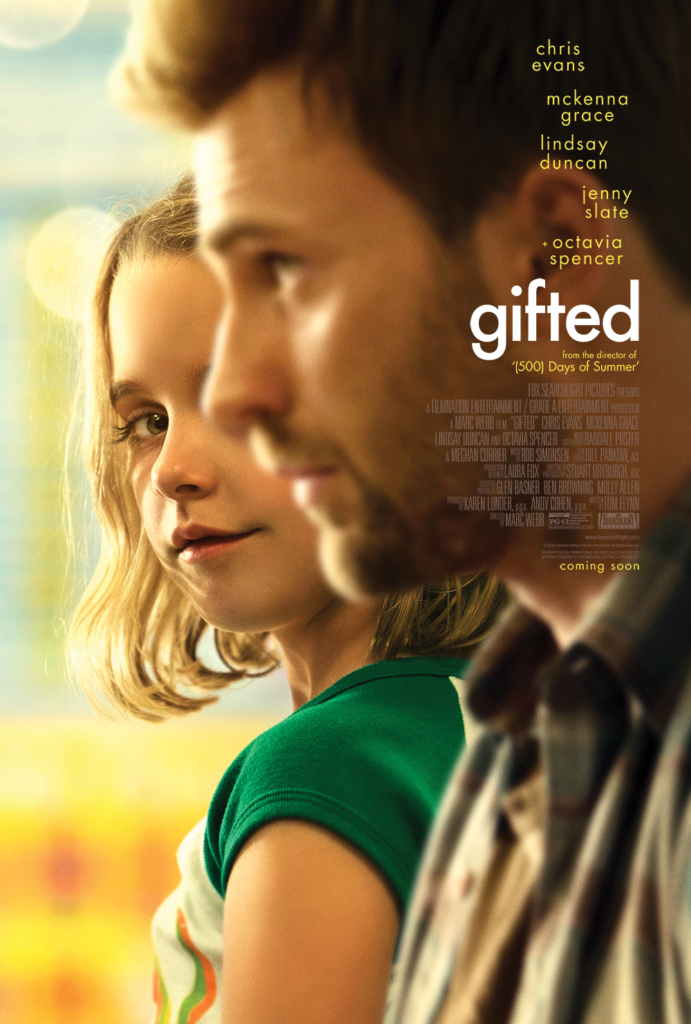 2.) Lucky readers of today’s blog post will get to join me at the advance screening of the film GIFTED on Monday, April 3rd at 7:30 PM (check-in at 7:00 PM). It opens nationwide on April 7. Click HERE to enter. You will receive a confirmation no later than Friday, March 31 if you get seated. You may bring a guest! Click here to see the trailer.

Synopsis: Frank Adler (Chris Evans) is a single man raising a child prodigy – his spirited young niece Mary (Mckenna Grace) – in a coastal town in Florida.  Frank’s plans for a normal school life for Mary are foiled when the seven-year-old’s mathematical abilities come to the attention of Frank’s formidable mother Evelyn (Lindsay Duncan) whose plans for her granddaughter threaten to separate Frank and Mary.  Octavia Spencer plays Roberta, Frank and Mary’s landlady and best friend.  Jenny Slate is Mary’s teacher, Bonnie, a young woman whose concern for her student develops into a connection with her uncle as well.

3) Here’s the inside scoop on the Dallas International Film Festival (March 30-April 9). If you’ve never been before or this is your 11th one to attend, you have to make time to figure out the films you want to see and make an effort to get there. My advise is to purchase a film festival pass because you will have access to ALL the films. But if that isn’t feasible, you can purchase individual film tickets here. And if you are luck, you might still be able to get a seat to the Art of Film honoring three-time Academy Award winner Robert Benton on Wednesday, March 29. Still need some help choosing which films to see over the 11-day film festival? I asked Artistic Director James Faust and PR Director John Wildman for their Top 10 film picks. Look at their lists, look at the schedule, plot a DIFF plan!

James Faust’s picks: GUESS WHO’S COMING TO DINNER – lead actress Katharine Houghton will be here to represent the film…hasn’t done it in over a decade..super sweet woman CORTEZ—writer/director/lead actress is from the area and she worked as a child actress on my first film as an intern. Great film for a date and there will be a music performance afterwards at our lounge. CITY OF GHOSTS—stellar documentary. REMEMORY—Peter Dinklage kills it in this film. Producer is Lee Clay. SMU grad and DIFF alum…he directed BEAUTIFUL BOY back in 2011. THE BIG SPOON-fun Austin comedy. THE RELATIONTRIP– probably my favorite film in the festival from a new director standpoint. The great date film of the fest! Co-director/writer/lead actress, Renee-Felice Smith is a CBS tv star on NCIS Los Angeles. She will be in attendance. SWEET SWEET LONELY GIRL—just a great creepy drama playing at midnight. All the filmmakers in attendance. You will not have a better time than this at the festival. DEALT – you can’t get much better than an amazing card trick magician…who happens to be blind! He will be here along with director Luke Korem. 44 PAGES– I don’t remember ever seeing Highlights magazine, but this doc is bring back a lot of memories for people. DOLORES – a powerful documentary about human rights and labor activist Dolores Huerta. She will be making a rare appearance at the festival. CHEER UP—documentary about the worst Finish cheerleading squad. Their coach travels to Dallas to learn how to be the best. A year in the lives of these young ladies is brutal and triumphant.

John Wildman’s picks: BERLIN SYNDROME – A twisted relationship drama/thriller with some unexpected psychological twists and turns in a kidnapping/captive person scenario. CORTEZ – A musician decides to distract himself by looking up an old flame and like a bull in a china shop nearly wrecks everything he finds especially after he discovers a major surprise. DAYVEON – A true “discovery” film about a young boy living in the shadow of his deceased older brother in rural Arkansas by trying to find a place in the gang culture there. WHAT LIES UPSTREAM – A documentary shot like a political thriller. Also, you will never look at that glass or bottle of water you are drinking the same afterwards. BUSTER’S MAL HEART – A complete mind bender of a film about a man that has lost his way in his own mind after coming under the influence of a crazy conspiracy theorist. Or is he the one that’s right and everyone else is wrong? DINA – A fly on the wall documentary about a mentally challenged couple preparing for their upcoming wedding and frankly, just getting along with life and each other. In its heartfelt simplicity, it’s remarkable. STRAD STYLE – An award-winner from Slamdance. A guy in Ohio who is a fan of the Stradivarius violin decides he can create one using a 3D printer and convinces a world-class musician as well. But now he has to do it… OLD STONE – A Chinese socio-political thriller about a simple man who makes a fateful decision to help an accident victim then gets saddled with all of the bills and responsibilities, and none of the appreciation – sending his life spiraling down the drain. Classic man against “the state” horror story. GOOK – A stylish and heart-wrenching drama about two Korean brothers and the African-American girl who works in their shoe store. The Rodney King verdict and riots turn all of their lives tragically upside down. HOW TO SUCCEED IN BUSINESS WITHOUT REALLY TRYING – A 1967 classic movie musical. It is as candy colored and Broadway showy as 60s musical can be with awesome Bob Fosse choreography and an iconic lead performance by Robert Morse. 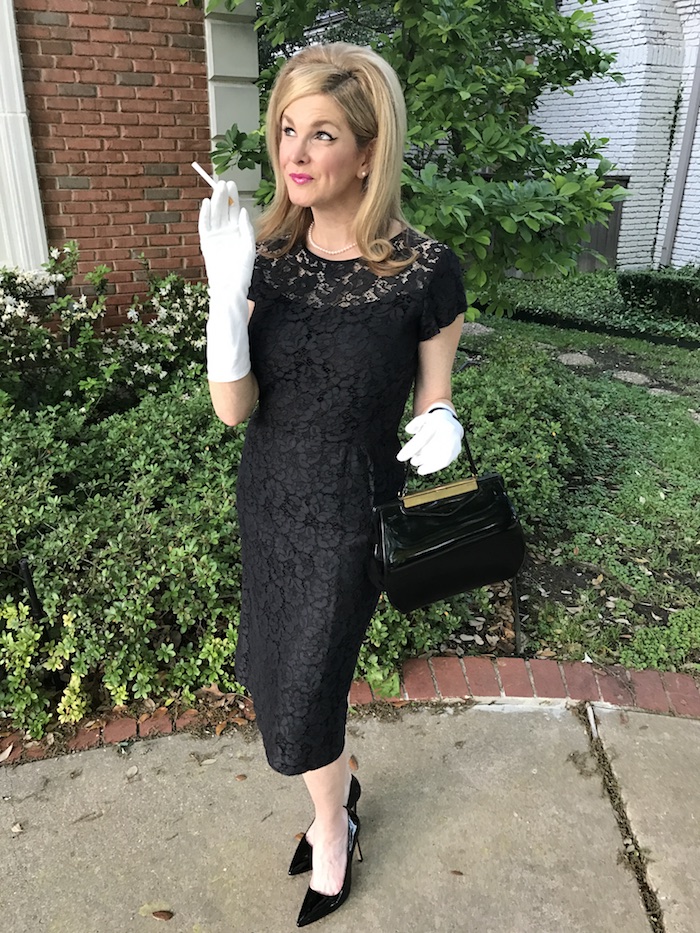 This photo was taken right before we departed to a fun birthday party that was 60’s inspired. I got everything at Vintage Martini which is a fantastic vintage store in Dallas! Channeling Mad Men for an early 1960’s inspired look.

4.) Here’s something I really don’t talk about on this site – my acting work. Yes, I am still at it and my agent is The Campbell Agency (in case you are some famous casting director looking for the perfect ‘blonde mom’ in your next film). Last week, I got to be apart of a fun comedy sketch that is a weekly podcast called Far Out Fiesta. Click here to see last weeks episode. It’s a crazy, fast paced scene read of 11 mini-stories! Richard Houghton is a comedy writing genius! As far as other work, It’s really hard for me to find. I audition and if I book, I am paid to do the job. I don’t necessarily see it. Someone once saw me selling cars in Colorado. I’m sure I was, I never saw the final commercial. Linking you to some of the work I was able to find below. Don’t laugh…

Osage Casino (yes that’s me in a gray wig)

Thanks for reading through this marathon of a post. It’s just another manic Monday.  xoxo – Tanya