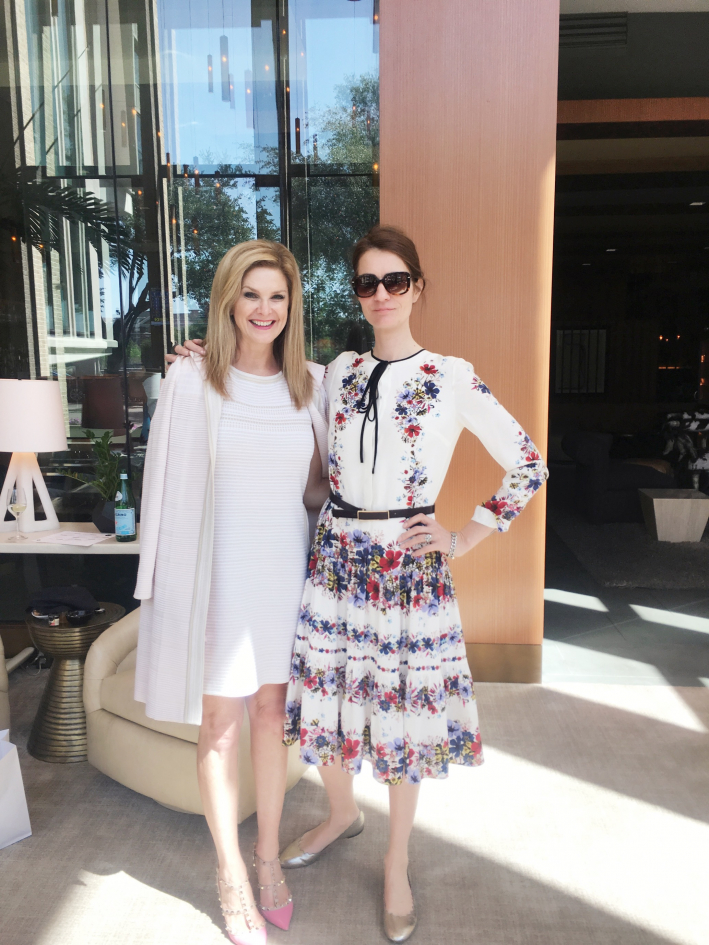 Yesterday was no ordinary Wednesday. I had the distinct pleasure of meeting New York Times Best Selling Author Plum Sykes. She was here on her book tour for Party Girls Die In Pearls. Does the name ring a bell? Well it should. She’s also a contributing editor for Vogue. Let’s explore.

I met Plum at her hotel before her book signing event on Wednesday evening. She’s on tour for her third book after her highly successful bestsellers Bergdorf Blondes and The Debutante Divorcee. She had just arrived from Chicago right after a party in Houston on Monday.The novelist and fashion journalist lives in London with her husband and two children. Weekends are spent at their beautiful country home in Cotswolds (I hear its dreamy and Vogue-worthy). She’s tall, flawless and so energetic. I discover that she has given up coffee (four espresso’s a day) and alcohol this year and she says that she has more energy than ever. While pretending to write notes about what she is telling me about the book, I quickly write down an action plan for myself. Note to self: Cut coffee and alcohol = feel better, have glowing skin and more energy. On it!

If you don’t know Victoria “Plum” Sykes here’s a quick run down. She’s a twin (with Lucy) and one of six children. In 1993 she began working for British Vogue and then in 1997 became a contributing editor for American Vogue. Her twin sister Lucy moved to New York and became the fashion director for Marie Claire magazine. It takes her about two years to write a book and she has already begun the process for her fourth, a sequel to this book. The plan is for there to be a total of three books in the Party Girls Die in Pearls series which is an uplifting frothy comedy and murder mystery with a touch of fashion. It’s meant to be a spoof on the Oxford elite.

I asked Plum a series of questions that I think make a great Q & A session. While doing this she wondered what we Americans do during “tea time”. I told her that we really don’t have such a thing and just grab a protein bar on the go. She was horrified by our American ways. It was delightful to have sparkling water with lime as I interviewed her. Plum ordered some toast with “a spot of jam and butter” to get her through the afternoon. Hey, it’s not a proper English tea time but it seemed refined.

A: I was 15 years old at school. However, in 1988 I attended Oxford and I thought at the time, I want to write a book about being here and use it as the setting. 1985 was the perfect year as the fashion backdrop for the book.

Q: How is it being a Vogue contributing editor and a novelist?

A: As President Trump said: “It’s more work than I thought.” It’s a lot to juggle. I don’t write until I get the girls to school each day.

Q: What’s your favorite part about being a mom to your beautiful girls Ursula and Tess?

A: The cuddles and the warmth of children. I don’t over schedule them which is a big mistake I think a lot of parents make.

A: It’s actually not a concealer but more like a magic wand. Yves Saint Laurent Touche Eclat Radiant Touch

Q: The one beauty product you can’t live without?

A: Bobbi Brown Tinted Moisturizer I absolutely adore Bobbi and her products are brilliant.

Q: What is your secret for the “jumping the pond” flight? Crossing the Atlantic ocean can really wreck your skin.

A: A few simple rules to live by. Drink lots of water. I don’t eat the meals on an airplane, instead I have a sandwich before I leave. I sleep the entire way. I tell the flight attendant if I am wearing my face mask it means “do not disturb”. Of course, business class always helps!

Q: What are you reading?

A: Oh, I have a few that I love. Hillbilly Elegy by J. D. Vance and When Breath Becomes Air by Paul Kalanithi. I also love Agatha Christie, Nora Ephron, Stephen King and P.G. Wodehouse.

Q: How has the fashion world changed since your beginnings at British Vogue?

A: The main thing that has changed the industry is the internet. It makes everything accessible now. Fashion designers are having to shift to a ‘show it now, buy it now’ model. It’s just a shift in scheduling if you think about it. Social media has changed things too.

And just like that, our time was over. Plum had to get ready for the book party. I got the exclusive interview and most importantly, an afternoon with a lovely new friend. xoxo – Tanya