You know what a huge film buff I am. And if you follow this blog you know that I love film festivals. You might be asking yourself how does one attend a film festival like Sundance, Tribecca or SXSW (South by Southwest)? Well, why don’t you start with the DIFF in our own backyard? The Dallas Film Society just announced some major tidbits about the 2015 DIFF (Dallas International Film Festival). And to celebrate I am giving away two festival passes to the April 9-19 film festival. These passes are each worth $375 and provide access for one person to all regular film screenings and panel discussions (not valid for Special Event / Gala Screenings) as well as access to the film festival lounge (as long as you are at least 21 years old). That’s 11 days of non-stop film and a $750 value!

Contest runs today through February 20th. You have to enter with the link below and you have two opportunities to enter – subscribe to the blog and LIKE my Facebook page. The winner will be announced on all social media after the contest ends. 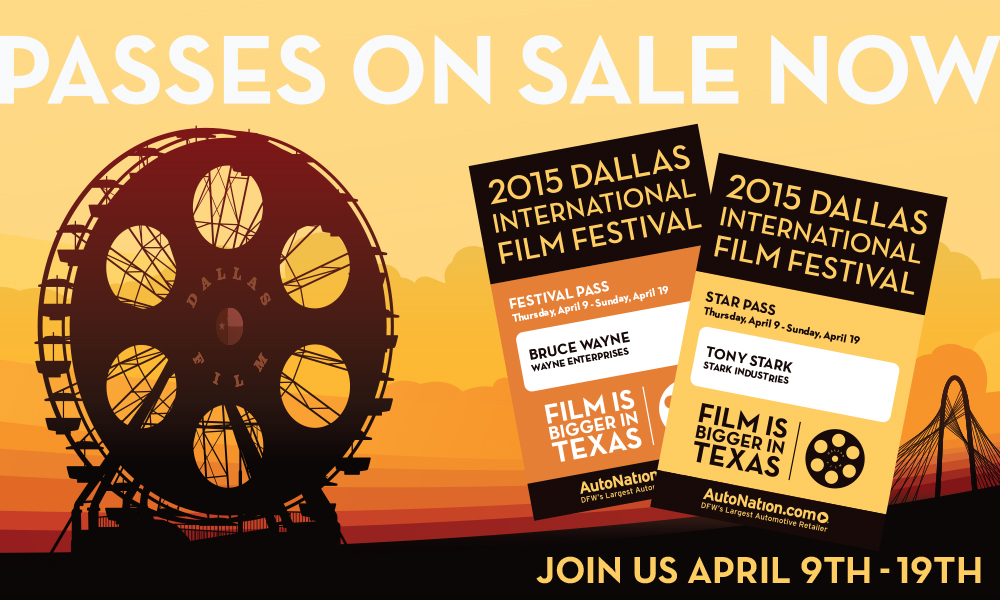 The Dallas Film Society is proud to announce that director John Landis will receive the Dallas Star Award at DFS Honors on Friday, April 17 at the Highland Hotel in Dallas. The Dallas Star Award honors individuals who have made significant contributions to modern cinema and the advancement of the art of film. The award presentation will be followed by a special screening of John Landis’s 1980 comedy classic THE BLUES BROTHERS on Saturday, April 18. John Landis has left a lasting impression on the film world as director of many iconic comedies such as NATIONAL LAMPOON’S ANIMAL HOUSE, ¡3 AMIGOS!, COMING TO AMERICA, TRADING PLACES, and INTO THE NIGHT. John Landis also wrote and directed AN AMERICAN WEREWOLF IN LONDON and the groundbreaking theatrical short MICHAEL JACKSON’S THRILLER.

“Confirming our first 10 films is a major milestone in producing our festival,” said James Faust, Artistic Director of the Dallas Film Society. “We plan to screen around 170 films this year, and are well on our way to selecting the best cinema has to offer. We’re also elated to mark the 35th anniversary of THE BLUES BROTHERS by honoring legendary filmmaker John Landis.”

The Festival will also celebrate the incredible life and career of Texas writer, actor and producer L.M. Kit Carson by featuring his 1983 film BREATHLESS. Carson is recognized for writing the Palme d’Or winning PARIS, TEXAS, and also for inventing the first ‘mockumentary’ with his film DAVID HOLZMAN’S DIARY.

Last April, DIFF successfully completed a marathon of more than 165 screenings with attendance surpassing 33,000. The 2015 Festival will highlight World Cinema, Latino Cinema Showcase, and an International Spotlight on Germany with red carpet entrances at theaters throughout the city, award presentations, filmmaker panels and other special events.

Returning again this year as Presenting Sponsor is AutoNation. “We are thrilled to welcome back AutoNation as our Presenting Sponsor. Their return to the festival further demonstrates their commitment to the community and the arts,” said Lee Papert, CEO of the Dallas Film Society.

This year, the Dallas Film Society has teamed up with DART for an exciting new partnership called DART to DIFF. Many DIFF activities and events take place in the heart of Dallas and the partnership with DART will provide quick and convenient transportation for all festival attendees.

5 FLIGHTS UP
Director: Richard Loncraine
USA
Cast: Morgan Freeman; Diane Keaton; Cynthia Nixon
Synopsis: Over one crazy weekend, a long-time married couple discovers that finding a new apartment is not about winding down, but starting a new adventure.

HOLLOW
Director: Ham Tran
Vietnam
Cast: Kieu Chinh; Jayvee Mai The Hiep; Ngoc Hiep Nguyen
Synopsis: A young girl falls into a river and drowns. When her body is found in a remote village along the river, her uncle arrives to claim her body, only to find that she is very much alive. But when she returns to her family, unexplainable occurrences lead them to believe she is possessed.

THE LOOK OF SILENCE
Director: Joshua Oppenheimer
Denmark/Finland/Indonesia/Norway/UK
Synopsis: In Joshua Oppenheimer’s companion piece to the Oscar® nominated THE ACT OF KILLING, a family of survivors of the 1965 Indonesian genocide discovers how their son was murdered and the identity of the men who killed him. The youngest brother is determined to break the spell of silence and fear under which the survivors live, and so confronts the men responsible for his brother’s murder – something unimaginable in a country where killers remain in power.

PLAYING IT COOL (North American Premiere)
Director: Justin Reardon
USA
Cast: Chris Evans; Michelle Monaghan; Luke Wilson; Aubrey Plaza; Topher Grace; Anthony Mackie
Synopsis: It’s this generation’s SWINGERS meets (500) DAYS OF SUMMER. The story is fresh, quirky, and weirdly relatable as this young, slightly pretentious man falls for an unlikely girl, and will stop at nothing to get her even after realizing she’s already in a relationship.

WESTERN
Director: Bill Ross; Turner Ross
USA/Mexico
Synopsis: For generations, all that distinguished Eagle Pass, Texas from Piedras Negras, Mexico was the Rio Grande. But when darkness descends upon these harmonious border towns, a cowboy and lawman face a new reality that threatens their way of life.