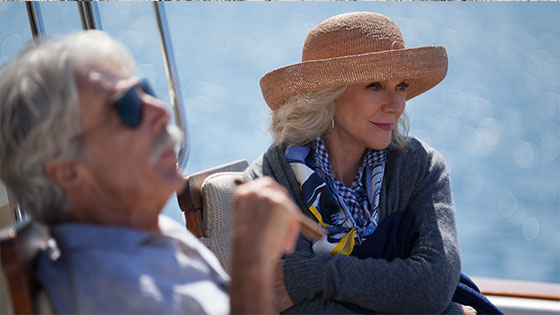 5:30 PM – Red carpet begins in front of the Majestic Theater; come out and see all of the A-listers walk the carpet

9:00 PM (or immediately after film): Opening Night party (must have a ticket to attend) at The Pads in the Aloft Hotel; party until your dancing feet can’t dance anymore

Don’t bother trying to crash the party. They have security and lists more efficient than the secret service. If you want to purchase tickets to any films or purchase a pass to the entire film festival, click here to join me for the entire 11-days of film. Overwhelmed by all of the great films they have programmed? The Prekindle Main Box Office is now open in Mockingbird Station. The fine folks working there can help you decipher the film guide.

So, who is ready to join me on opening night? Just click below to enter to WIN. Winner will be announced on the blog on Friday, April 3.

I’ll See You in My Dreams
USA, 2015, 95 min., Color
It seems like every other film coming out now is a “coming of age” movie. What about those “of age”? Brett Haley’s I’LL SEE YOU IN MY DREAMS is about those who have seen it all and can teach the rest of us a little something about living.

A retired school teacher and widow, Carol Petersen (Blythe Danner), spends most of her days working in her garden, playing cards, gossiping with friends and relaxing with a glass of wine. She lives a nice quiet life. Her world is turned upside down by a series of unexpected events that cause her to engage in new relationships and reevaluate the way she’s been living. A new Carol is born; she tries speed dating, befriends the 30-something pool cleaner (Martin Starr), reignites a love for singing and begins dating a handsome gravely voiced retiree named Bill (Sam Elliot), who might just be the coolest man on the planet.

I’LL SEE YOU IN MY DREAMS is a wonderfully sweet and engaging “of age” dramedy that will leave audiences thinking life begins in your 70’s…or whenever you want it to.

DIRECTOR BIO
I’LL SEE YOU IN MY DREAMS is the sophomore feature film by writer/director Brett Haley. Prior to DREAMS, Brett co-wrote and directed the feature film THE NEW YEAR, which won the Audience Award for Best Narrative Feature at the Sarasota Film Festival and was a Critic’s Pick in The Village Voice and LA Weekly. Brett started his professional career as an assistant to directors Terry George (RESERVATION ROAD, HOTEL RWANDA) and John Hillcoat (LAWLESS, THE ROAD, THE PROPOSITION). From Key West and Pensacola, Florida he graduated with a B.F.A. in Film Directing from the University of North Carolina School of the Arts in 2005. He currently resides in Brooklyn.