Congratulations to STACEY A.

Stacey is the WINNER of the two tickets to see Blake Shelton and Usher on February 6th at the United Way of Metropolitan Dallas 90th anniversary celebration. She gets to attend the concert and after-party.  Thank you to everyone who entered the contest. Didn’t win but still want to go? Here is all the information on how to join me at this fabulous event.

Join BLAKE SHELTON and USHER on February 6, 2015, for the United Way of Metropolitan Dallas 90th Anniversary Celebration, presented by AT&T.

Save your seat to the concert and after-party at the Unite Forever Gala, presented by Kimberly-Clark Corporation. The concert, presented by PepsiCo, will rock AT&T Stadium, on Friday, February 6, 2015, and feature reigning CMA Entertainer of the Year and five-time reigning CMA Male Vocalist of the Year, BLAKE SHELTON, along with winner of 17 Billboard Music Awards and eight Grammy Awards, USHER.

You are invited to the Unite Forever Gala Concert and After-Party, presented by Accenture. Click here to reserve your concert vouchers and after-party credentials by using the access code AFTERPARTY. Concert/After-Party packages are available for $500, which includes two premium concert vouchers, two After-Party passes and complimentary parking.

Doors to AT&T Stadium will open at 6 PM. The show and concert begin at 7:30 PM, and the After-Party will start at 10 PM or immediately following the concert.

Please join us for the “OMG” event of the year! “Sure Be Cool if You Did”…

I hope to see you there. Happy weekend! xoxo- Tanya 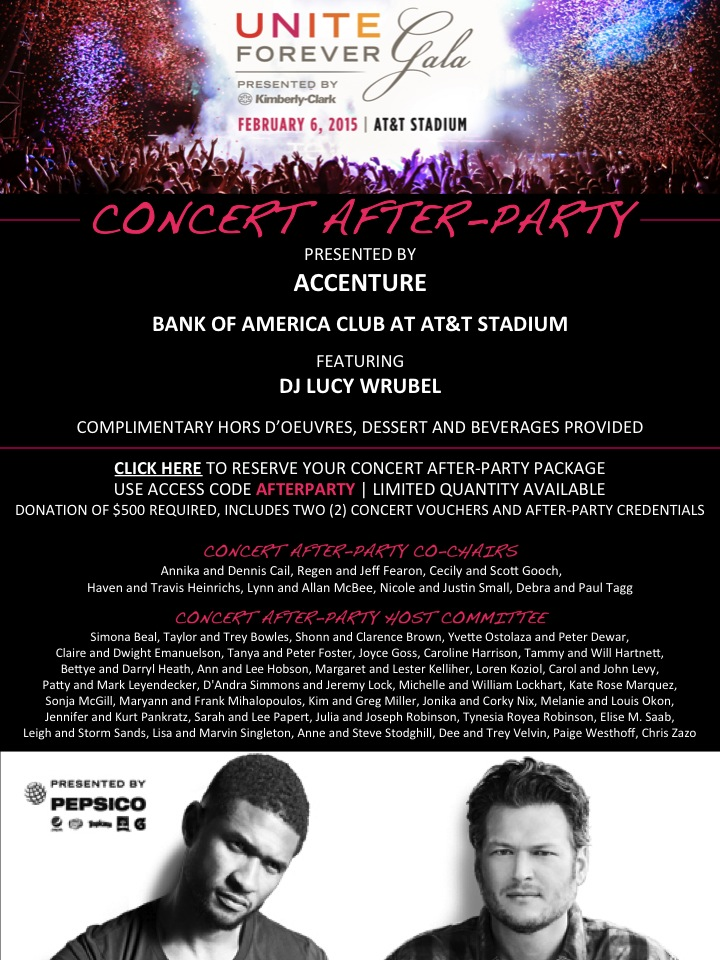