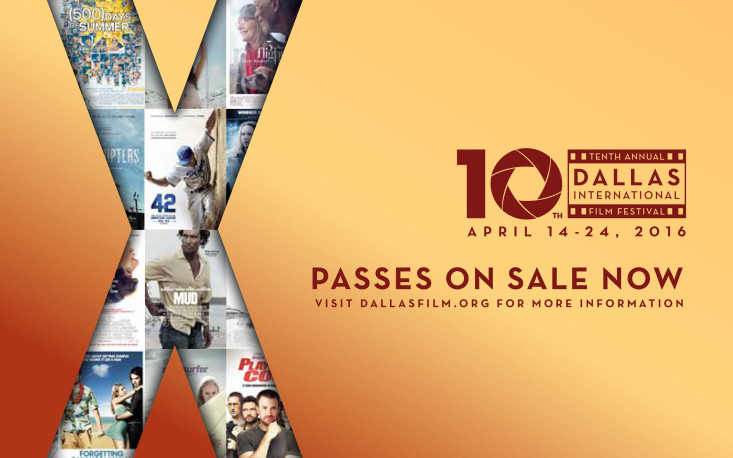 I’ve been out of town with my toes in the sand for a few days so today I am playing catch up on the blog. I’ll share the vacation details with you later this week but until then I have something super important to share – the 10th annual Dallas International Film Festival is coming up from April 14-24 and you don’t want to miss it!

Shout out to all my film peeps at DIFF (Lee, James, Sarah, Karen, Marc, John to name a few) because they are in the 24/7 period of putting together the most exciting film program for the 2016 DIFF. They have just announce their first 10 selections and I am sharing them with you below. I happen to know of a few more films that got in but I’ve been sworn to secrecy (hint: one might involve me in a little role). Of course I will share that with you as soon as I can!

Here’s the important part. Film Festival passes are available online NOW by clicking here. Tickets go on sale to the public on Thursday, March 24th (same site). You don’t want to miss this film festival. As you know I love film and shared that with you in this post about this years Sundance Film Festival. The DIFF allows you to see the best of independent film right here in your own backyard.

Grab your popcorn and join me for 11 days of cinematic magic.  xoxo – Tanya

The Dallas Film Society today announced the initial ten official selections for the 10th edition of the Dallas International Film Festival. The list of titles are led by the Centerpiece Gala selection of Chris Kelly’s OTHER PEOPLE and include two world premieres (Johnathan Brownlee’s THREE DAYS IN AUGUST and William Kaufman’s DAYLIGHT’S END), and a U.S. premiere (Asiel Norton’s ORION). DIFF has also announced a special event concert and screening of the family classic E.T. – THE EXTRA TERRESTRIAL, celebrating the career of legendary film composer John Williams.

Ten for ten: This is a great group of films to tease what’s in store for the 10th Anniversary of the Dallas International Film Festival this year,” said James Faust, Artistic Director of the Dallas Film Society. “Our first Gala selection is guaranteed to strike an emotional chord with our audiences. We have some amazing and powerful films making their world and U.S. Debuts; Dallas films, Texas films, and quite a few world renowned directors are represented as well. These ten films serve as a perfect sampling of the balance we have always tried to achieve for the film audiences at DIFF – entertaining, challenging, with big stars and newcomers, international, local, and independent – it should all be right here in April, once again.”

Willliam Kaufman’s DAYLIGHT’S END is the rare action/horror thriller that makes it into a non-genre competition at a film festival, as it screens in the Texas Competition. It stars Johnny Strong, Lance Henriksen, and Louis Mandylor in a hard-driving action-horror- thriller about a rogue drifter who agrees to put aside his mission of vengeance to help rescue a desperate band of survivors in an abandoned police station, as they struggle to defend themselves against blood-hungry creatures that used to be human.

The ten official selections include:

A TALE OF LOVE AND DARKNESS

Director: Natalie Portman
Country: Israel/USA, Running Time: 98min
Based on Amos Oz’s international best-seller, A TALE OF LOVE AND DARKNESS is the story of Oz’s youth at the end of the British Mandate for Palestine and the early years of the State of Israel. The film details young Amos’ relationship with his mother and his birth as a writer, looking at what happens when the stories we tell, become the stories we live.

Strong, Lance Henriksen and Louis Mandylor. It focuses on a rogue drifter who’s on a vengeful hunt, years after a mysterious plague has devastated the planet and turned most of humanity into blood-hungry creatures. When he stumbles across a desperate band of survivors in an abandoned police station, the drifter reluctantly puts his own thirst for blood on hold and agrees to help them defend themselves, only to realize that his mission of revenge and theirs may in fact coincide.

Director: Johnnie To
Country: Hong Kong, Running Time: 120min
Adapted by actress Sylvia Chang from her hit stage play “Design For Living”, the film is a musical set in a corporate high-rise immediately before and after the 2008 financial collapse. The story centers around two assistants starting new jobs at a financial firm. One naively enters the world of high finance with noble intentions, while the other harbors a secret. Chow Yun-fat, Eason Chan and Tang Wei star alongside Chang.

LO AND BEHOLD, REVERIES OF THE CONNECTED WORLD

Director: Werner Herzog
Country: USA, Running Time 98min
In LO AND BEHOLD, REVERIES OF THE CONNECTED WORLD, the Oscar-nominated Herzog chronicles the virtual world from its origins to its outermost reaches, exploring the digital landscape with the same curiosity and imagination he previously trained on earthly destinations as disparate as the Amazon, the Sahara, the South Pole and the Australian outback. Working with NetScout, a world leader in real time service assurance and cybersecurity, Herzog leads viewers on a journey through a series of provocative conversations that reveal the ways in which the online world has transformed how virtually everything in the real world works – from business to education, space travel to healthcare, and the very heart of how we conduct our personal relationships.

Director: Asiel Norton
Country: USA, Running Time: 110min
In a future dark age, after civilization has collapsed, there are rumors and prophecies of a savior to come. A hunter fights to save a maiden from a cannibal shaman and searches for the world’s last city. The film stars David Arquette and Lily Cole

OTHER PEOPLE – CENTERPIECE GALA SELECTION
Director: Chris Kelly
Country: USA, Running Time: 97min
A struggling New York City comedy writer, fresh from breaking up with his boyfriend, moves to Sacramento to help his sick mother. Living with his conservative father and younger sisters, David feels like a stranger in his childhood home. As his mother worsens, he tries to convince everyone (including himself) he’s “doing okay.” The film stars Molly Shannon and Jesse Plemons.

Director: Rokhsareh Ghaem Maghami
Country: Germany/Iran/Switzerland, Running Time: 91min
Winner of the World Cinema Documentary Grand Jury Prize and Audience Award at the 2016 Sundance Film Festival, SONITA tells the inspiring story of Sonita Alizadeh, an 18- year-old Afghan refugee in Iran, who thinks of Michael Jackson and Rihanna as her spiritual parents and dreams of becoming a big-name rapper. For the time being, her only fans are the other teenage girls in a Tehran shelter. And her family has a very different future planned for her: as a bride she’s worth $9,000. Iranian director Rokhsareh Ghaem Maghami poignantly shifts from observer to participant altering expectations, as Sonita’s story unfolds in an intimate and joyful portrait.

THREE DAYS IN AUGUST – WORLD PREMIERE
Director: Johnathan Brownlee
Country: USA, Running Time: 96min
Starring Barry Bostwick, Meg Foster, and Mariette Hartley, the film is about an Irish American artist who is forced to confront her past when both sets of parents come together over a weekend for her to paint a family portrait.

Director: Keith Maitland
Country: USA, Running Time: 96min
On August 1st, 1966, a sniper rode the elevator to the top floor of the University of Texas Tower and opened fire, holding the campus hostage for 96 minutes. When the gunshots were finally silenced, the toll included 16 dead, three dozen wounded, and a shaken nation left trying to understand. Combining archival footage with rotoscopic animation in a dynamic, never-before-seen way, TOWER reveals the action-packed untold stories of the witnesses, heroes and survivors of America’s first mass school shooting, when the worst in one man brought out the best in so many others.

Directors: Josh Kriegman, Elyse Steinberg
Country: USA, Running Time: 96min
With unrestricted access to Anthony Weiner’s New York City mayoral campaign, this film reveals the human story behind the scenes of a high-profile political scandal as it unfolds, and offers an unfiltered look at how much today’s politics is driven by an appetite for spectacle.

ABOUT THE DALLAS FILM SOCIETY 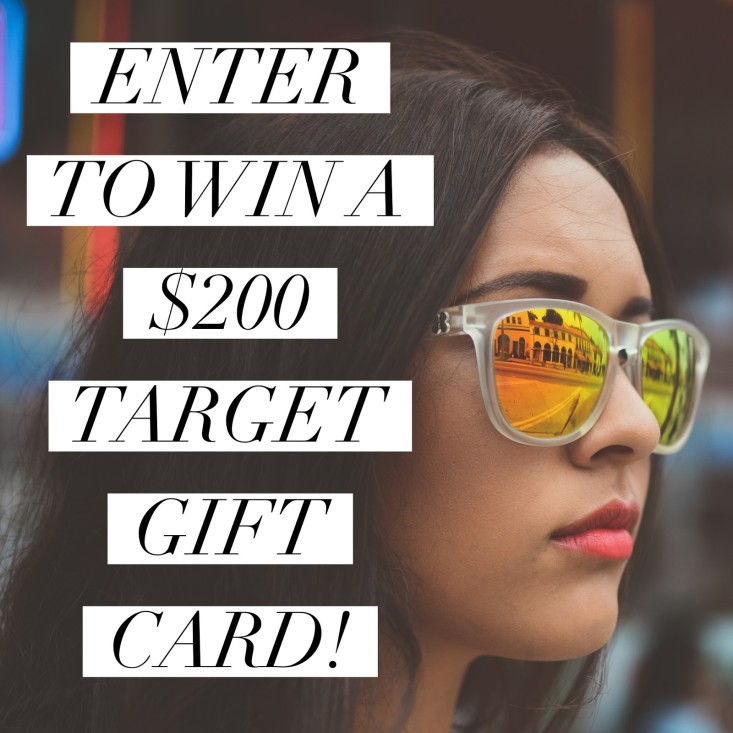 Prize: $200 Target Gift Card
Giveaway organized by: Oh My Gosh Beck!
Rules: Use the Rafflecopter form to enter daily. Giveaway ends 3/30 and is open worldwide. Winner will be notified via email.